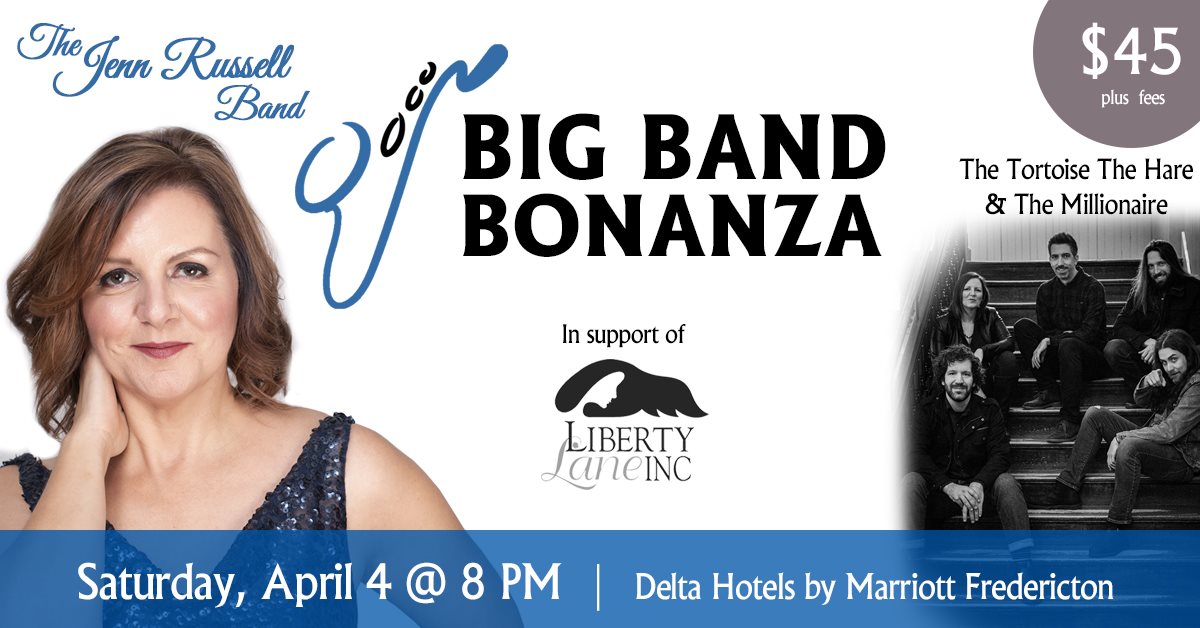 Following the success of our inaugural Big Band Bonanza event last February, talented singer-songwriter Jenn Russell (also known as New Brunswick’s chief medical officer of health) and her band are back for an encore!

On April 4th at the Delta Fredericton, get ready to dance to original big band music filled with twists from other genres – everything from 40s style jazz to bluegrass, swing, and the blues. We have planned a fun, classy evening with live performances by The Jenn Russell Band and funk quintet The Tortoise The Hare & The Millionaire. There will be a cash bar on site and light hors d’oeuvres will be served.

Jenn Russell and her Music!!

​Jenn Russell doesn’t just walk the line between conventional and unconventional, she jumps across it on a pogo stick, bouncing in each realm as life’s demands dictate and then hopping to the other side to rebalance and refuel.

Jenn’s day job is as New Brunswick Chief Medical Officer. It’s a big job. Her role as NB’s main physician is to improve, promote and protect the health of the people in New Brunswick. On the other side of the line is her passion for music. As she prepares to release her second CD of original jazz and swing music, she is ready to share her passion for music and performing with fans and fellow musicians.

“Music has been a creative outlet for most of my life,” says Jenn. “I’ve played in school bands, jazz bands in university and a number of cover bands in Fredericton. I’ve always loved connecting with people through music, whether it’s the people I’m playing with or the people who have come out to see us perform.”

Beyond being a creative outlet, music has also become an opportunity for Jenn to give back to her community.   She has produced several  fundraisers at the Playhouse for the Stan Cassidy Rehabilitation Centre, Helping Hands for Haiti, Village of Hope and Hospice Fredericton. She was recognized for her contribution to her community with the Diane London award in 2014 at Riverjam. This latest CD release is a fundraiser for Liberty Lane, a Fredericton based women’s shelter and support program for women and children affected by abuse.